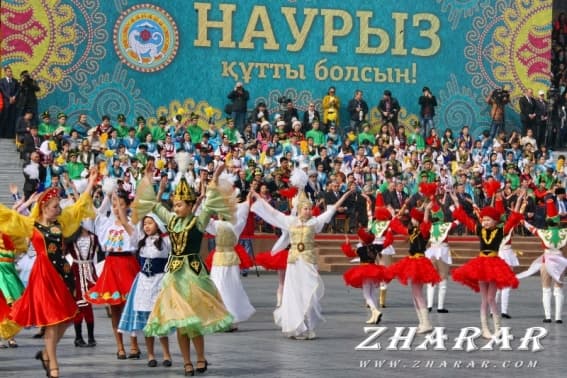 Nauryz is one of the oldest holidays on Earth. This holiday of spring and the renewed life of the Earth has been celebrated for over five thousand years by many cultures of the Middle and Central Asia and, according to some sources, by eastern Slavs as well.

Historical records referring to this holiday can be found in ancient and middle age documents. In the oriental chronology, it corresponds to Navruz, the Iranian New Year. Kazakhs, Uzbeks and Uighurs passed the Nauryz traditions from generation to generation. The Tajiks called it Gulgardon or Gulnavruz, the Tatars refer to it as Nardugan and the Ancient Greeks knew it as Patrich. The roots of this holiday can be traced to old pagan rituals. The celebration was meant to reflect people's love to nature. People have preserved the rituals, and today the holiday has acquired new spiritual and ethical meaning.

This holiday has been celebrated on 22 March, the day of the spring equinox. That's why the Kazakhs call the month of March Nauryz. It was celebrated as the day of the renewed life which comes with the spring. It was the day when the first spring thunder strikes, buds are swelling on the trees and vegetation grows wildly. Nauryz as a non-religious celebration of the spring and renewal is closely linked to some other Kazakh holidays, such as a "farewell to winter" festival. Boys born on this day would be called Nauryzbai or Nauryzbek, and girls Nauryz or Nauryzgul. It was seen as a good omen if it was snowing on that day.

The March snow is usually soft and particularly white. Beautiful girls were often compared to the white snow of Nauzys. In the past, the Kazakh called Nauryz the Day of the People or the Great Day of the People. People believed, the more generous the celebration of Nauryz was the happier the year would be. Therefore, there are so many rituals and festivities related to this holiday. On the eve of the holiday, people would clean their homes, pay back their debts and reconciled with their opponents because, as the old people used to say, if Nauryz entered the house, all diseases and failures would pass it by. On the night before the festival, all vessels in the house would be filled with milk, airan (plain yogurt), grain, and spring water because it meant that people would have a lot of milk, good yield and plenty of rain during the coming year.

During the day, everybody tried to be in good spirits, would give a big hug to each other and wish good fortune and happiness to others. The celebrations would begin with sunrise. There is an old ritual "If you see a spring, clean up its source". At dawn, all adults, youngsters and children would pick up spades, go to an agreed place near a spring or aryk (small water canal) and clean it. There, they would also plant trees under the supervision of respectable old people. During the process, they had to say: "Let a man leave a tree rather than a herd in the people's memory" and "If you cut one tree, you will have to plant ten!"