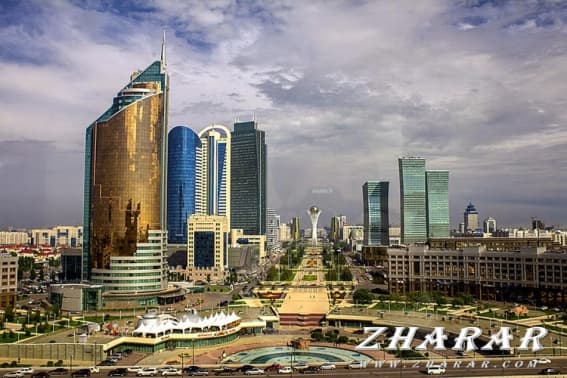 Until the 1950s Astana (Aqmola), was a tiny mining town. Then Nikita Khruschev announced his Virgin Lands scheme to turn 250,000 sq km of Kazakhstan steppe into wheat fields. Aqmola became the project’s capital and was renamed Tselinograd (Virgin Land city). An influx of Russians and others from the western USSR came to work here.

Despite wind erosion, which turned a lot of the new wheat fields back into steppe. Aqmola is still the center of very important grain –growing region. After Kazakhstan independence, it got back its old name (which means White Tomb). In 1994 President Nazarbaev named it, to universal skepticism, as Kazakhstan’s future capital, to replace Almaty by the year 2000. More recently he announced that the change may take place by 1998 and that diplomats (therefore embassies) may move to Aqmola even sooner. It’s a friendly and fairly town, with some attractive tree-lined streets, but prone to strong steppe wind and harsh winter.

Astana (also called Akmola), the capital of the Republic of Kazakhstan since 1997, is situated on the picturesque banks of the Ishim River.

The climate of the region is a harsh continental one with typically long and snowy winters.

Akmolinsk was declared a town in 1862 and had long been famous for its fairs. Merchants from all over Kazakhstan, Russia and Central Asia met here. With the development of the Virgin Lands the town was renamed Tselinograd and became the administrative center of an agricultural region.

Since becoming the capital the city has changed dramatically. Astana is becoming one of the regions' main business centers hosting all governmental organizations, the diplomatic missions of 44 countries and 113 joint ventures and foreign businesses. Every year the city hosts various international industrial exhibitions, conferences, musical events and festivals.

Architects and builders are working in the capital non-stop, trying to keep pace with its rapid development.

The 105m-high Baiterek Tower has become the city's symbol and landmark with a 97m-high observation deck providing a bird's eye view of the city. The figure of 97 symbolizes the year the capital was moved from Almaty to Astana. The Baiterek Tower hosts an art gallery, a large aquarium and a restaurant.

The city has an opera and ballet theater, a drama theater and a variety of museums. These monuments link Astana to its past, an important aspect for Kazakhstan.

In industry of entertainment - center "Duman" in which the idea of the President of Kazakhstan Nursultan Nazarbaev about creation of the one entertaining center where it would be possible to have a rest with all family was embodied. Many people perceive the oceanarium in rather severe decor of northern Kazakhstan as coral branch, stiffened into ice. A drop of the southern seas, taken away more than on three thousand kilometers - an oceanarium - is a unique, the first and the only in Kazakhstan, heart of entertaining center "Duman". The entertaining center represents the complete construction consisting of several thematic zones: the Oceanarium, 3D-Cinema, a network of cafes and trading halls, the central zone intended for walks and rest, the Amusement "Jungle", bowling, a casino, a multipurpose hall and a hotel complex.

Another attraction is the Atameken Ethno Park, a unique outdoor museum set on a 1.7 hectare-large map featuring the cities and historical sites of Kazakhstan. The project is created in "Kazdesign" with involving of well-known architects and designers. Authors of the project - T.Sulejmenov, A.Ordabaev, S.Bairov, A.Kajnarbaev, N.Anarkulov and A.Kenzhetaev. The Alley of Heads of the States connects it to the located nearby Monument to victims of political reprisals. On a map 14 areas and 2 cities of republican value (Astana and Almaty) are located. Here all variety of natural-climatic zones and landscapes, architecture and city construction ensembles is shown. But nevertheless the main things are monuments of a history and culture. The ethno-memorial complex was opened on September, 8, 2001 in capital of Kazakhstan under the initiative of President Nursultan Nazarbaev. This year the park will celebrate the fifth anniversary. Palace of peace and consent

Everything in the world is afraid of time, only time is afraid of pyramids. So ancient Egyptians spoke and built the mysterious pyramids, immortalizing a name of the pharaoh in time and space. The pyramid, hard and cut, has reached us as a firm symbol of eternity. There are no architectural cult objects in the world that are similar to the Palace of the peace and the consent in Astana. Of course, there are the constructions that collect different religious traditions under the roof, but the Kazakhstan temple, unlike them, are one big platform for meaningful dialogue. And it is quite logical, that there where representatives of various world traditional religions will be going to, the Museum of culture, University of civilizations, Opera theatre for 1500 places will be placed. And all this magnificence will be held by four powerful supports – symbolical, hands of the world. It some kind of demonstration of religious tolerance, good will and hospitality of Kazakhstan. The author of the unique project - glorified British architect Norman Foster. The pyramid will connect the left and right sides of Ishim. Steel, aluminum, set of special glass designs, unique technical ideas, architectural innovation - a construction actually resembles a miracle. The panoramic lift will allow all wishing people to admire beauty of green terraces and game of light flowing from the dome of a pyramid. It will be even more interesting to walk to the top: passing through trailing gardens of Astana as they already named. However, there will be a good sight from outside too: majestic pyramid of Foster is visible from both coasts of Ishim. And its top will shine from within at night. The Presidential center of culture of Republic Kazakhstan Being on the crossing of two largest highways of Astana - Republic Avenue and Baraeva Street - it is possible to see majestic snow-white ensemble of the Presidential center of culture of Republic Kazakhstan. It is one of the most beautiful buildings in architecture of capital. From height of the bird's flight it represents a circle with missing beams on four sides, light that is symbolical for traditional culture of Kazakh people. The tribute of Turkic architectural tradition - the blue dome towering above the ground on 38,5 meters, gives to city aroma of the East. It crowns the axial center of all composition - a five-floor museum, which radius of 19,5 meters. Formed on the merge of the State museum of Republic Kazakhstan and Republican public library named after S. Sejfullin, a complex became certain "accumulator" of a spiritual heritage and cultural tradition of Kazakhstan people. Funds of a museum total 143223 units of storage and are incorporated into thematic collections: Archeological, ethnographic, carpet-felt, fine arts, the Kazakh traditional jeweler ornaments, horse equipments, ancient furniture and subjects of a life, rare books, the weapon, documentary photographs, numismatics and bonistic. In the central hall the collection of gifts that were submitted to the President of Republic of Kazakhstan. It will consist of the gifts presented by N. A. Nazarbaev from Heads of the States and the governments of the different countries and official delegations. The library of the Presidential center of culture has the richest fund which totally is more than 700 thousand books - on these pages all history of Kazakhstan from nomad up to our contemporary times is written down.